My name is Nils Zumbansen, Ph.D. I’m from Germany.

You can contact me under the following email / Sie können mich über die folgende E-Mail-Adresse kontaktieren:

The Scottish lake Loch Ness is probably best known for its legendary water-beast Nessie. Interestingly, the alleged first sighting of this supposed monster dates back to the early Middle Ages. It is recorded in Saint Adomnán’s biography of the 6th-century Christian missionary and abbot Saint Columba.

Loch Ness, the second largest Scottish loch or lake, draws many visitors from all over the world. This deep, freshwater loch in the Scottish Highlands is situated southwest of the city of Inverness. It extends approximately 37 kilometers or 23 miles, forming a part of  a large valley – the Great Glen. In general, you can see a rugged and, at the same time, beautiful lake landscape.

While exploring this area, visitors may also come across the picturesque ruins of Urquhart Castle on a promontory which is on three sides surrounded by Loch Ness’s water. Alongside providing a superb view of the loch and its surrounding landscape beyond, the castle ruins convey a tranquil and even idyllic atmosphere, although on the promontory it can by very windy. 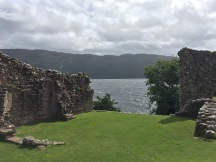 The ruins and their surrounding landscape (2016)

But the idyllic scene today conceals a violent history. During the 500s AD the site had probably been a fort and was likely occupied by the Picts, a Celtic tribal federation of peoples, before a castle was erected there in the 13th century. Because of its strategic position Urquhart Castle witnessed several sieges.

After the Jacobite Rising of 1689-1690 troops that supported the new King William of Orange marched out of the castle in 1692, blowing up some of its buildings. Subsequently, its other parts fell into decay.

Photo of the ruins of Urquhart Castle (2016) 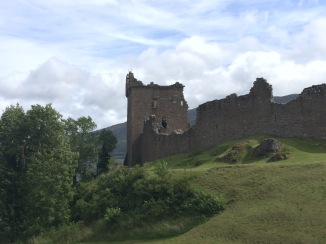 Another photo of a part of Urquhart Castle (2016)

Urquhart means ‘by the wood or thicket’. A written reference to a place that was called  Airchartdan and that modern scholars equate with Urquhart first appeared in Saint Adomnán’s hagiography or biography of the life of the 6th-century Irish churchman, Christian missionary and abbot Saint Columba (c.521-597). Notably, St Adomnán (c.624-704) was a kinsman of St Columba, a canon jurist and, like his relative, a saintly abbot.

St Adomnán completed his important work with the title Vita Sancti Columbae (Eng. Life of Saint Columba) roughly 100 years after St Columba’s death. While telling various events of St Columba’s life, he presents him as a model of a pious Catholic monk, a hard negotiator with kings, a successful missionary, a charismatic hero with prophetic skills and a miracle worker.

In one chapter St Columba miraculously saves one of his companions from a water-beast in or around Loch Ness. This alleged event is particularly striking because it is arguably the origin or original source of the legendary monster Nessie with which Loch Ness is probably most associated in today’s popular culture. Besides the supposed encounter with the water-beast of legend, St Columba is connected with other significant issues in Scottish history.

Around 521 Col(u)m Cille – which translates as ‘dove of the church’ – or Columba was born into a powerful Irish family. Notwithstanding his family background, he didn’t aim for secular power. Instead, he early on seems to be predestined for a life in the church. Yet, after some troublesome time for him, he left Ireland to go on ‘a pilgrimage for the love of Christ’ in Scotland.

There Columba founded a number of monasteries. Among them was the famous Iona Abbey. (Note that the small island Iona is part of the Inner Hebrides on the western cost of mainland Scotland.) Established by Columba in 563, Iona not only became a centre of Celtic Christianity but also highly contributed to the spread of the Christian faith among the Picts and Anglo-Saxon peoples in areas of present-day Scotland and England since the abbey sent out missionaries.

As for Columba, the saintly churchman served as Iona’s first abbot. Remarkably, his 9th successor as abbot of Iona was his relative and hagiographer St Adomnán.

Even though Columba – who died on 9 June 597 – is one of the patron saints and the Twelve Apostles of Ireland, he has also been revered in Scotland throughout the centuries. His monastic community on the island Iona actively fostered his cult as a saint after his lifetime. Poetry and other texts were written to praise him and to emphasize his holiness. A case in point is, of course, St Adomnán’s aforementioned hagiography Vita Sancti Columbae.

Legends about St Columba state – among many other issues – that in times of need kings turned to the saint and that he, for example, appeared to the 7th-century saintly King of Northumbria (i.e. parts of today’s northern England and south-east Scotland) Oswald before the Battle of Heavenfield in 634. Later on the famous King Kenneth I or Kenneth MacAlpin (810-858) had his relics moved to the Scottish town Dunkeld.

Needless to say, in Scotland during the High Middle Ages other saints rose in importance. However, St Columba remained a significant Scottish saint. For instance, his alleged relics, the Breccbennach, were carried by the Scottish army at the historic Battle of Bannockburn where the Scottish defeated the English on 24 June 1314.

In recent decades, St Columba has still exerted influence in Scotland by representing a kind of ecumenical saintly figure. That means, both Scottish Catholics and Scottish Protestants respect him as an ‘apostle of Scotland’. Moreover, as mentioned above, one story about him seemingly gave rise to a popular Scottish myth – Nessie, the Loch Ness Monster.

St Columba at the Loch Ness – His Encounter with Nessie

According to St Adomnán’s Vita Sancti Columbae and the Historia ecclesiastica gentis Anglorum (Eng. the Ecclesiastical History of the English People) by the renowned English Benedictine monk and scholar St Bede the Venerable, during the second half of the 6th century St Columba visited the Pictish king Bridei or Brude at his court supposedly near the modern city of Inverness. Hence, on his long journey he must have travelled through the Great Glen.

St Adomnán tells us that St Columba came round to a Pictish residence called Airchartdan. Here he baptized Emchath, a dying Pict, and his whole household. Whether Emchath’s residence Airchartdan – which is equated with Urquhart – was on the site where now visitors find the remnants of the once-mighty Urquhart Castle, cannot be confirmed with absolute certainty.

At Urquhart Castle and at Loch Ness in general, sensation-seeking tourists nowadays not only want to view the ruins and the impressive Scottish loch but also attempt to catch a glimpse of the legendary Loch Ness Monster Nessie. Since roughly the 1930s – when several alleged sightings of the monster were reported and the fake surgeon’s photograph was produced –  Nessie has developed into a cultural phenomenon or myth. For Loch Ness the monster basically constitutes a marketing tool. 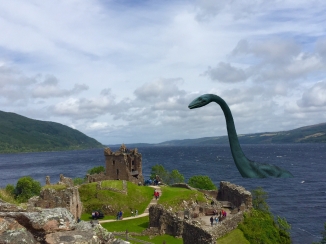 The Loch Ness Monster at Urquhart Castle; the photograph was taken – and modified 😉 – by me. (2016)

Broadly speaking, tales of mythical beasts in Highland lochs have long existed. Nevertheless, the first supposed sighting of such a water-beast in or around Loch Ness was recorded by St Adomnán in his hagiography Vita Sancti Columbae, in which the 28th chapter (How an aquatic monster was driven off by virtue of the blessed man’s prayer) of Book II. On His Miraculous Powers reads as follows:

“ON another occasion also, when the blessed man was living for some days in the province of the Picts, he was obliged to cross the river Nesa (the Ness); and when he reached the bank of the river, he saw some of the inhabitants burying an unfortunate man, who, according to the account of those who were burying him, was a short time before seized, as he was swimming, and bitten most severely by a monster that lived in the water; his wretched body was, though too late, taken out with a hook, by those who came to his assistance in a boat. The blessed man, on hearing this, was so far from being dismayed, that he directed one of his companions to swim over and row across the coble that was moored at the farther bank. And Lugne Mocumin hearing the command of the excellent man, obeyed without the least delay, taking off all his clothes, except his tunic, and leaping into the water. But the monster, which, so far from being satiated, was only roused for more prey, was lying at the bottom of the stream, and when it felt the water disturbed above by the man swimming, suddenly rushed out, and, giving an awful roar, darted after him, with its mouth wide open, as the man swam in the middle of the stream. Then the blessed man observing this, raised his holy hand, while all the rest, brethren as well as strangers, were stupefied with terror, and, invoking the name of God, formed the saving sign of the cross in the air, and commanded the ferocious monster, saying, ‘Thou shalt go no further, nor touch the man; go back with all speed.’ Then at the voice of the saint, the monster was terrified, and fled more quickly than if it had been pulled back with ropes, though it had just got so near to Lugne, as he swam, that there was not more than the length of a spear-staff between the man and the beast. Then the brethren seeing that the monster had gone back, and that their comrade Lugne returned to them in the boat safe and sound, were struck with admiration, and gave glory to God in the blessed man. And even the barbarous heathens, who were present, were forced by the greatness of this miracle, which they themselves had seen, to magnify the God of the Christians.”

All in all, this chapter apparently laid the foundation stone for the myth of Nessie.

It is impossible to corroborate whether the story is true or not. At any rate, a large creature, its mate and / or its offspring are extremely unlikely to have survived multiple generations from approximately the 6th century down to our own age. Despite previous unsuccessful attempts to find (traces of) the Loch Ness Monster – including extensive sonar searches – some people still aim to prove its existence. This modern form of monster-hunting is the pseudoscience of cryptozoology.

Perhaps St Columba succeeded in ridding us from Nessie once and for all. Otherwise, if you really discover a threatening water-beast one day in the Loch Ness, you know what to do. Make the sign of the cross and say the following magic words: thou shalt go no further, nor touch me (or – if there is a group – us); go back with all speed. 😉

All photos were taken – and modified – by me (Nils Zumbansen).

the easiest way to discover your next favorite blog

Astral Lucid Music - Philosophy On Life, The Universe And Everything...